In Recycle Rush, two alliances of three robots compete to score points by stacking totes on scoring platforms, capping those stacks with recycling containers, and properly disposing of pool noodles, representing litter. In keeping with the recycling theme of the game, all game pieces used are reusable or recyclable by teams in their home locations or by FIRST at the end of the season. Each alliance has two minutes and thirty seconds to score as many points as they can. 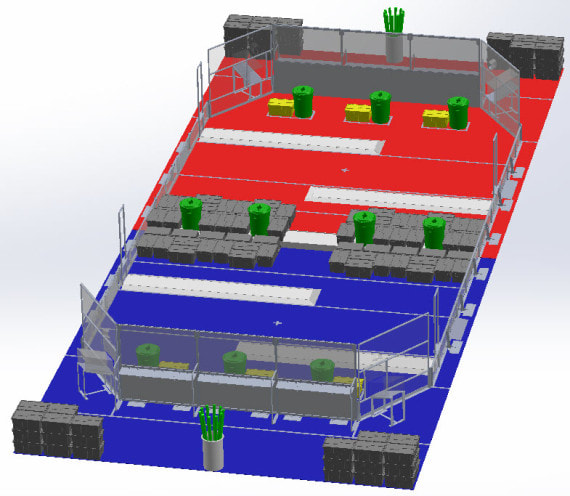 Recycle Rush is played on a 27-foot by 54-foot carpeted area, but each alliance is constricted to one 27-foot by 27-foot half of the field. The field is bisected by a wooden platform called the Step. Teams stack totes on the two Scoring Platforms designated for their alliance. The field is divided into three main zones on each side: the Staging Zones, where the robots are required to begin the game; the Auto Zones, located between the Scoring Platforms for each alliance; and the Landfill Zones, located between the Step and one Scoring platform, where teams will collect totes. Alliance Stations and Player Stations are located behind the Alliance Wall at each end of the field; additional totes and litter (pool noodles) will be waiting here to be put into play by the human player.

Recycle Rush is played with totes, recycling containers, and litter. The match begins with 128 grey totes and 6 yellow totes. 32 gallon green Rubbermaid™ Recycling Containers are also used as game pieces, and litter, or green pool noodles, will be placed inside these containers to score points.

After the fifteen second Autonomous Period, drivers assume direct control of their robots. Alliances must stack totes on the Scoring Platforms, cap the stacks with recycling containers, and dispose of litter by placing it in the containers or in the landfill. Points can also be earned by cooperating with the opposing alliance to place or stack four yellow totes on the Step.

In Recycle Rush, points are calculated at the end of the Autonomous and Teleoperated Periods. Coopertition Sets and Stacks are awarded points as soon as they are accomplished.